If you have in recent times tried using the “I’m Feeling Lucky” search button at google.co.in, you would have noticed that it’s just there and does nothing. That’s because the button, which was earlier meant to take a user directly to the first search result for a keyword, was rendered dysfunctional since the introduction of Google Instant.
Now, the button disappears the moment you key in the first letter of your keyword in the search box. You will need to switch off the instant feature to be able to use the I’m-feeling-lucky button, something that may not be worth the trouble. That’s fine, but then why this puzzling presence of an unusable button? It looks like Google has found an answer.
A few days ago, Google effected an interesting feature change with its “I’m feeling lucky” button, which looks a trivia now but could become a very powerful Google tool if well harnessed. Before we talk about the details, it’s to be noted that the new features aren’t yet for google.co.in but can still be experienced by Indian users at google.com.
So if you go to google.com (which you easily can, by just clicking at the link on the right-most bottom of your Google search page), you can see how the idle button comes alive. The moment you hover your mouse pointer on the button, many other options quickly spins inside the button before stopping at any one option, say “I’m Feeling Hungry.” As soon as you move the pointer away, it changes back to “I’m Feeling Lucky.” (You will need to move the pointer back and forth multiple times to discover the other options, and yes, it could be fun doing that.)
There are a total of eight other options I was able to note: I’m Feeling Trendy, I’m Feeling Playful, I’m Feeling Hungry, I’m Feeling Wonderful, I’m Feeling Artistic, I’m Feeling Doodley, I’m Feeling Stellar and I’m Feeling Puzzled. Let me know if you find any more.
Now coming back to the point: How could these options be turned into powerful tools? Well, actually one of the options, “I’m Feeling Hungry” already demonstrates how. If you click on that, Google shows up the eating options available in your area, using Google Maps. In fact, since Google Maps is used as the underlying technology, plentiful options can be seen for various cities in India. I took a screenshot of the Maps view of eateries in Bangalore, for instance (see pix). 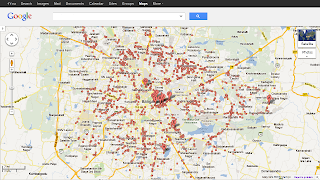 Other emotion searches like “I’m Feeling Wonderful” are not yet that powerful and universal. Clicking this emotion, for example, takes you to a “World Wonder Project” page which displays world heritage sites by various cities and themes. In Asia, sites from only Israel and Japan feature so far. If this feature could be extended to include locations (not necessarily the photos) of hundreds and thousands of smaller sites across various cities, it would be a useful tool for tourists and even in-city visitors, similar to the “I’m Feeling Hungry” results.
Indeed, it’s a bit puzzling that if Maps could be leveraged to throw up universally useful eatery results, why the same engine doesn’t work as efficiently for historical sites too.
Of course, a next step would be to extend the feature to the country level search pages like google.co.in.  And yes, the spinning emotions inside “I’m Feeling Lucky” box are hard to tackle, so it’s important that Google made some improvements there.
© 2018 BusinessandMarket.net, the insights service provider focused on IT and telecom, offering rich analysis done by subject matter specialists.
To make a service inquiry, click http://www.businessandmarket.net/p/your-inquiry.html

How the mixed reviews are a big positive for Microsoft: # 1.

Mobile phone radiation: A real experience of a reader